Culinary megastar sage is a pretty, low shrub with pale, velvety greyish-green leaves. Many people might not know this, but sage is a member of the mint family. It is very easy to cultivate and grows well in the ground, indoors, and in containers. If you are looking to add a new herb to your current herb mix, then read on to learn everything about growing sage from seed in this ultimate guide of this versatile and hardy plant.

Sage is widely used in both the culinary world as well as for medicinal purposes. It is generally known as a showstopper of fall dishes, complementing poultry and pork, pairs excellently with lamb, and is usually used in Thanksgiving stuffing. Sage also gives tantalizing flavor to fall and winter risottos and squash dishes.

It’s both flavorful and aromatic and can be cultivated with Mediterranean herbs like basil or rosemary. Many people believe that sage’s medicinal properties are effective for helping relieve stomach ailments and improving memory. Moreover, apart from using sage in cooking and as a medicine, there are various varieties of this herb that are purely ornamental.

There are approximately 900 species of salvia, the biggest genus of the mint family’s plant. But some of the more popular types of sage that are commonly used are:

Garden Sage – It’s one of the most common varieties of sage and is also generally referred to as ‘common sage.’ It is hardy and can easily resist harsh winters while bouncing back each spring. Soft, silvery-green leaves with blue and purplish flowers make this herb an excellent part of any herb garden. But know that after three to four years, it turns woody and might need to be replaced.

Grape Scented Sage – It’s one of the most extensive growing types of sage that grows up to eight feet in height and six feet in width. Some people might assume that it smells or tastes like grapes due to its name, but in reality, it doesn’t. Instead, it has a sweet smell of freesia that attracts hummingbirds and can be used to make tea.

Golden Sage – It’s a creeping plant that has golden and green variegated leaves. Golden sage is a beautiful herb to have in a garden as it’s color accentuates whatever is planted around it.

Mealycup Sage – The most popular version of mealycup sage is known as blue salvia. It grows about two to three feet in height and is generally an annual plant. It has lovely white, blue, or purple flower spikes with numerous varieties such as ‘victoria blue’ and ’empire purple.’

Mexican Bush Sage – It is a drought-tolerant sage and grows around three to four feet in height. Despite withstanding drought conditions, Mexican bush sage is a lovely accent plant that is a tender perennial with purple and white spikes.

Pineapple Sage – This type of sage is generally grown as an ornamental plant but is widely known to have medicinal properties. Pineapple sage, a perennial, grows tubular red flowers to attract butterflies and hummingbirds.

Purple Sage – These have purplish leave when they’re young. They are also used in cooking, but unlike common sage, they do not bloom often.

White Sage – It is also known as bee sage. White sage is a slow-growing, evergreen perennial shrub that can approximately three years mature and grows two to three feet in height. It is mostly used in cooking.

Tricolor Garden Sage – It is similar to purple sage in appearance but has white, uneven accented leaves, giving it a façade of being tricolored.

Scarlet Sage – It’s an annual herb that thrives in full sun but can also survive in partial shade as long it is planted in well-drained soil. It possesses striking scarlet blooms that grow in late spring and throughout the first frost of the year.

Apart from its lovely foliage and aromatic taste, what makes sage so special? Read on to learn why growing sage in your garden can give your numerous benefits:

Sage is a drought-tolerant plant and grows best in well-drained soil. This herb does not like to have wet feet, making it an excellent plant for xeriscaping and container gardening.

Sage’s disinfecting properties make it an excellent natural mouthwash that is believed to prevent dental cavities and plaque. Sage mouthwash can also help treat many other oral complaints like infected gum, mouth ulcers, and throat infections.

Once cultivated, sage grows extremely fast. The plan can easily be propagated by cuttings or layering stems. Remember, the more you harvest from your sage plant, the bigger it is going to get.

One teaspoon of dried sage as 10 percent of the RDI (reference daily intake) of Vitamin K and 1 percent RDI of each of the following: Calcium, Iron, Manganese, and Vitamin B6. All these nutrients in only 0.4 carbs and two calories.

Sage grows well in a wide range of planting zones (4-11) and temperature. It usually has a long growing season to the extent that in certain areas, sage remains evergreen. It easily endures a few freezes and frosts before calling quits.

For centuries, sage has been widely used for its medicinal properties. It works great as an anti-inflammatory and antioxidant herb. It works effectively to soothe sore throats, coughs, aid with fertility and menstrual issues, relieve bad stomach, and help with mental disorders.

The best time to plant sage is one to two weeks before the last frost of the year or when the ground temperature reaches 65°F.

Sage requires a loamy, sandy, and well-drained soil to thrive. The pH level of the soil for optimal growth should be between 6.0 and 7.0. Remember, never over-fertilize the soil if you are growing sage for culinary purposes; whilst you may achieve faster growth, the flavor intensity would be lost. Moreover, if you’re planting sage in clay soil, mix it with sand and organic matter to allow better drainage.

Sage thrives in medium to full sun and grows well indoors and containers; just ensure that it receives six to eight direct sunlight every day for optimal growth. Additionally, sage will be a hardy perennial if you plant it in zones 5 to 8. On the other hand, if you belong to the humid zones nine or anywhere south, it’ll most likely be an annual.

Sage is a relatively drought-tolerant herb. Even if it starts to wilt, it’ll typically perk up with water. Never over-water sage as it doesn’t like to have wet feet; instead, wait until the soil dries entirely and only then water it.

Mostly, sage plants grow in a round bush, so ensure you do not plant them very closely and provide them enough space to mature properly. Ideally, sage should be planted approximately 24 inches apart.

The process of growing sage from seed is not very hard. From where to plant it and how to achieve the best results, just follow our step by step guide and enjoy for years through your homegrown sage.

You can start growing sage by using varying methods. If you have had never planted sage before, you can either plant sage seeds (remember they can be temperamental) or obtain a small sage plant from a garden center and transfer it into a clay pot or a garden bed. Moreover, if you already have a well-grown sage plant in your garden, you can easily use a layering technique or cuttings to grow a new plant.

Sage thrives well in a rich, loamy, clay soil that drains well and is also high in nitrogen. It favors soil with a pH level of 6 – 6.5.

Once the soil is prepped, you can either plant the seeds in the ground or pots.

When the sage plant is young, you should only mist them with water sprays to keep the soil moist.

Ideally, sage grows well in full sunlight, but they can also survive in the partial shade of hotter areas.

Once the threat of freezing ends, but before new sage growth begins, prune the woodier, older, sage stems in early spring. Each branch should be pruned about a third.

Mildew is the only issue sage-growers have to deal with. This can be prevented by carefully watching your sage plant during humid, hot weather and thinning them regularly to intensify air circulation.

Sage plant is generally not a victim of pests, but sometimes it can be disturbed by spittlebugs, spider mites, and thrips. If there are any signs of pests, try using insecticidal soap or organic pesticides to keep them under control.

After about 3 to 5 years, the sage will turn woody and straggly and will require to be replaced. You have the option to either start again with seeds or a new plant or use the old plant for layering and cutting.

Harvest your sage plant slightly during the first year by picking off leaves when you need them.

Sage is one of the uncommon herbs that acquires a stronger flavor when dried. However, it should be dried quickly to prevent the development of a musty taste.

Apart from being used as an aromatic herb in culinary needs, it can also be used in soaps and potpourri. Here are a few things that you can do with sage

Can Sage Survive Cold Weather? Sage is a cold-hardy herb plant. Mostly regions lying in the planting zones 5 to 8, most sage varieties would simply turn dormant during winters, but they almost always come back in spring.

Why is My Sage Plant Withering?

Why is My Sage Plant Withering? The most common reason for a withered sage plant is insufficient or overwatering. Ensure your plant’s soil is dry before watering to avoid mildew and brown or yellow spots.

How Long Does Sage Last?

How Long Does Sage Last? As long as you are properly caring, harvesting, and pruning your sage plant every season, it can easily last for several years. Some people have discovered that their plants turn more and more woody as years go by, and approximately after three, the sage is no longer as flavorful or productive as before. Nevertheless, many other people have noted that by cutting woody stems by the end of each growing season, many additional years can be acquired of this herb.

Is Sage Perennial or Annual?

Is Sage Perennial or Annual? It is both. If you’re living in the planting zones 5 to 8, your sage plant would be a perennial and grow back year after year during spring. On the other hand, if you live in zone 9 or further south, if you’re in zones nine and further south, the sage plant would most likely be a one-year or annual plant.

Sage is a wonderful and versatile herb that can quickly be grown outdoors or indoors. We hope this ultimate guide of how to grow sage from seed allows you to enjoy its flavor, aroma, health benefits, or the aesthetic appeal which it provides. If you’re a nature enthusiast, adding sage to your homegrown herb mix would be an excellent idea to attract bees, hummingbirds, and butterflies. 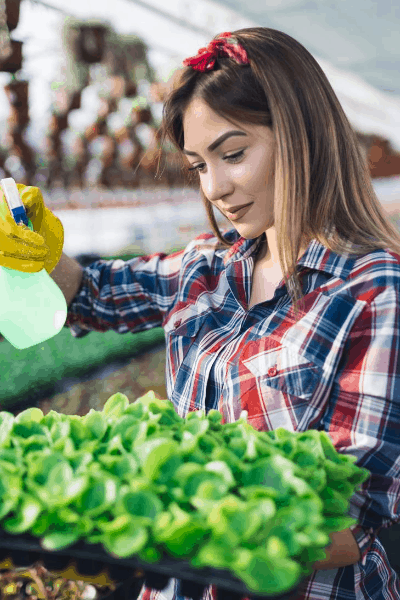